1.25% tax increase to cover social care costs has been announced for all taxpayers under government plans to fund a health and social care levy. 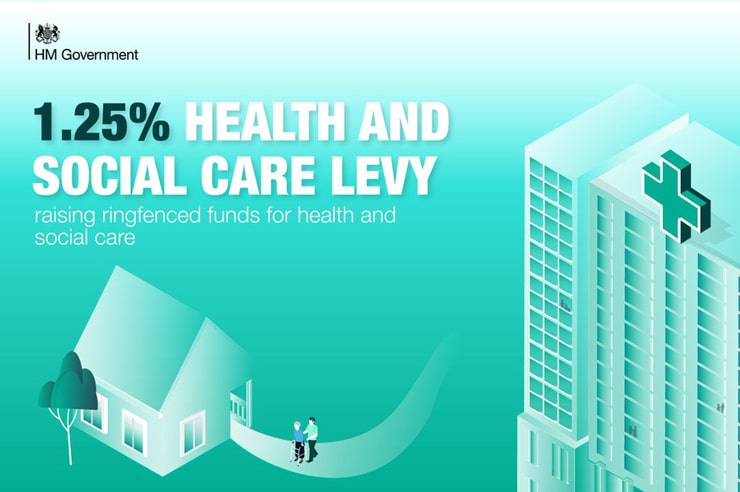 There will also be changes to the amount of savings people can retain when facing a move into care costs and a cap on total cost liability for anyone paying for care home accommodation and care.

The new tax increase to cover social care costs is set to raise £12bn a year and marks a major departure from the Conservatives’ manifesto which committed to the triple lock on income tax, national insurance and VAT.

An estimated £5.5bn of the levy will be allocated to social care, while the balance will be used for NHS funding to catch up with the backlog of operations after the pandemic.

Although it was originally floated as an increase in national insurance contributions (NICs), it will now be ringfenced purely for health and social care costs. The levy will be paid by businesses and individuals, including the self-employed, from April 2022, and this will be extended in April 2023 to workers who continue to work after the state pension age.

New Legislation for the Charge as an Independent Tax

Legislation will be passed to ensure that the charge is an independent tax, discrete from NICs and it will take a year for HMRC to update its systems to accommodate the levy as a separate charge, as opposed to a NICs’ increase on payslips.

This means that people earning £24,000, less than the average wage, would pay an additional £260 a year due to this tax increase to cover social care costs, which will be clearly indicated as the social levy on payslips. Anyone earning less than £9,680 will not have to pay the levy. 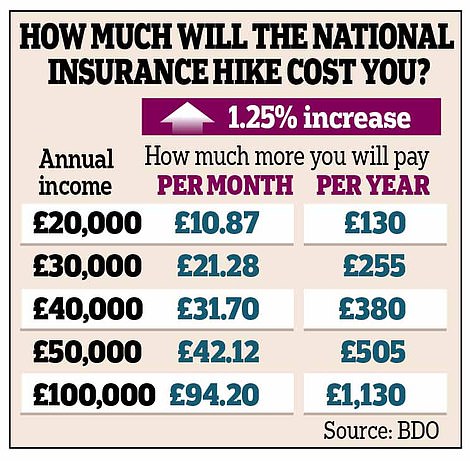 The dividend tax, which will see the current rate of 7.5% rise to 8.75%, and is expected to raise an estimated £600m; this will be legislated in the next Finance Bill. The government said that additional and higher rate taxpayers are expected to contribute over 70% of the revenue from this increase in 2022-23.

He added: ‘We need reform and change, we need to build back better. When Covid started, 30,000 beds in hospitals were used by people waiting for care home beds. Governments have ducked this problem for decades. There can be no more dither and delay, and we cannot rely on insurance as the premiums would be too high.’

Johnson said the plan to create a specific levy as opposed to raising income tax, for example, was to ensure that the charge was spread across individuals and businesses.

‘Our new levy will share the cost between individuals and businesses, and everyone will contribute according to their means, including those above state pension age, so those who earn more will pay more. Income tax is not paid by businesses so the whole burden would rest on individuals. The new levy will fall on businesses and individuals. And the highest earners will pay the majority. And because we are also increasing dividends tax rates we will be asking better-off business owners and investors to make a fair contribution too’, said Johnson.

He stressed that the highest-earning 14% will pay around half the revenues, no one earning less than £9,568 will pay the levy as a result of this tax increase to cover social care costs, and the majority of small businesses will be exempt, with 40 per cent of all businesses paying nothing at all.

This will raise an estimated £12bn a year, with money from the levy going directly to health and social care across the whole of the UK.

Existing NICs reliefs to support employers will apply to the Levy. Companies employing apprentices under the age of 25, all people under the age of 21, veterans and employers in freeports will not pay the levy for these employees as long as their yearly gross earnings are less than £50,270, or £25,000 for new freeport employees.

As far as individuals are concerned, the government has made some attempts to address the inequities of increased taxation on earned income by increasing the rate of tax on dividends (in order to reduce the benefits of routing income through service companies).

This, however, introduces asymmetries elsewhere in the tax system. The top rate of tax on dividends will increase to 39.35% – nearly twice the 20% top rate of tax on the capital gain. Individuals who hold material shareholdings in trading or investment companies will have clear incentives to try and structure their returns as capital gains rather than dividend income.

There will also be wide-ranging changes to the costs paid by people facing residential care. The PM set out plans for a limit on what people can be expected to pay. From April 2023, no one starting care will have to pay more than £86,000 towards their care.

Currently, anyone in England with assets over £23,250 must pay for their care in full.

The savings limit will also be increased to £20,000 from the current £14,000, which means that they will not have to make any contribution to care costs.

The supporting document primarily sets out ongoing issues with NHS backlogs and plans to address this, but also gives brief details on how the new asset limits will work.

When these reforms are implemented, around 150,000 people will directly benefit at any one point in time.

A white paper on integrated health and social care will be released later this year setting out more detailed plans.

Contact MCL Accountants Southend on 01702 593 029 if you have any queries regarding the 1.25% tax increase to cover social care costs or if you need any assistance with the preparation and submission of your company accounts or self-assessment tax returns to HMRC