Table of Contents SHOW
1 “Notification letter” from HMRC
2 Check your tax affairs are up to date
3 Disclose any undeclared foreign income
4 How to pay what you owe
5 Letter from HMRC – How can MCL Accountants help?

Have you received a letter from HMRC about overseas assets, income or gains? If yes, read on to find out what you should do next.

If so then do not worry, this is not a notice to prosecute you for tax evasion and this letter from HMRC is part of their “nudge letter” campaign prompting taxpayers to bring their tax affairs up to date. This letter from HMRC about your overseas income is also referred to as “notification letter“.

HMRC aren’t targeting you specifically because they have carried out a tax investigation against you, this letter has merely been generated by HMRC’s system as your details have been included on a list provided to HMRC by regulated financial institutions (such as banks) in other countries about individuals who have received interest income, rental income, dividends etc. in a foreign country.

This letter from HMRC is often accompanied by a “Certificate of tax position” that HMRC ask you to complete and return to them by selecting one of the 4 options listed on the certificate. 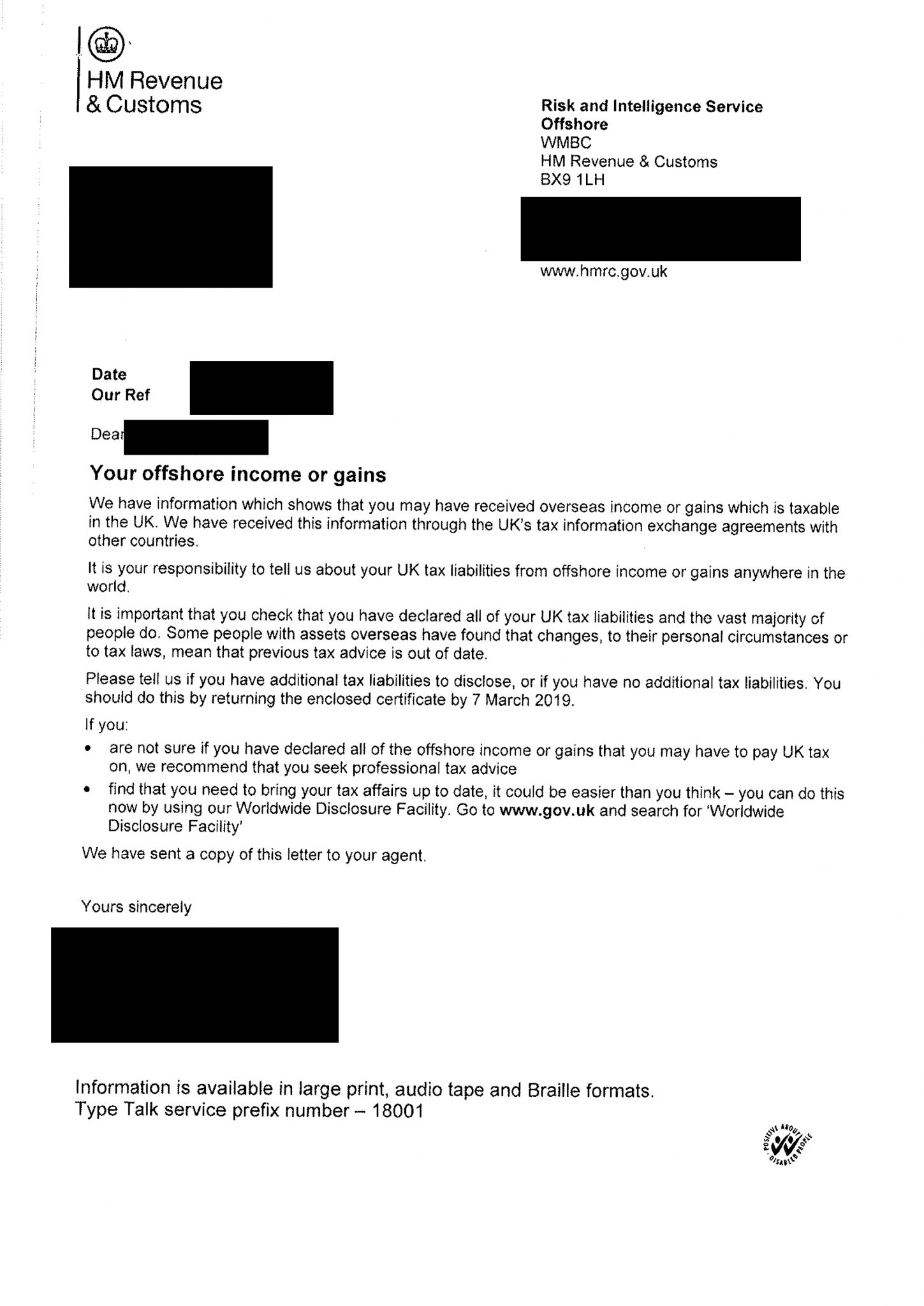 Letter from HMRC about overseas income

If you get the notification letter from HMRC about your money or assets abroad, you’ll need to check your tax affairs are up to date, then either:

Check your tax affairs are up to date

When you get the notification letter from HMRC, you’ll need to check your tax affairs are up to date by making sure you’ve declared and paid UK tax on your money or assets abroad.

You don’t need to do anything else if you’ve already told HMRC about your foreign income or assets and paid the UK tax due.

If you find you’ve got undeclared foreign income or assets, you’ll need to make a disclosure to HMRC.

If you check your offshore tax affairs and find undeclared money or assets abroad, you’ll need to tell HMRC by making a disclosure. You can do this through HMRC’s Worldwide Disclosure Facility. We cover this in detail in a separate article here.

To make a disclosure you’ll need to:

When you register for the facility, you ‘notify HMRC of your intent to disclose’. You’ll have 90 days to make your disclosure from the date you register.

You could be charged further penalties if you don’t declare foreign income or assets, so it’s better to tell HMRC as soon as possible. Making a disclosure could help reduce the amount of penalty you have to pay.

How to pay what you owe

You’ll need to pay the full amount you owe at the same time as you make the disclosure. You’ll get full details of how to pay during the disclosure process. 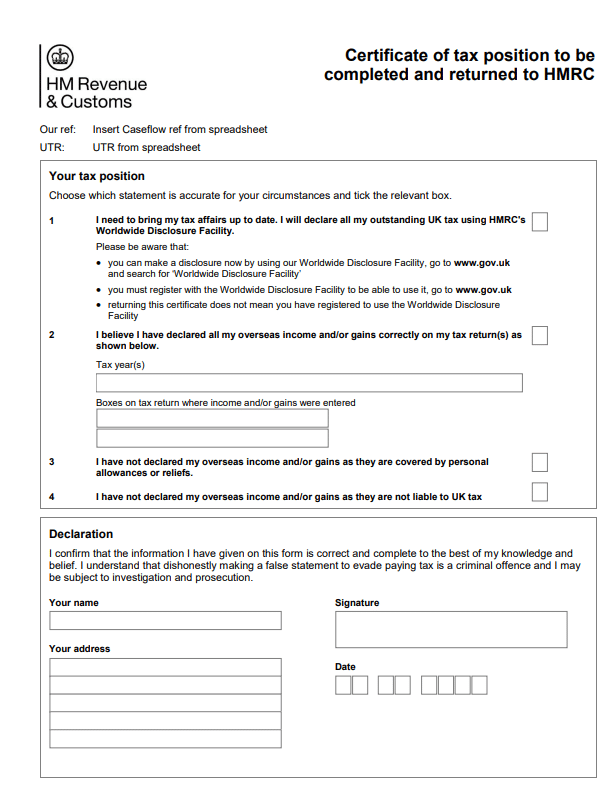 Letter from HMRC – How can MCL Accountants help?

We have recently assisted a large number of clients who have received a letter from HMRC regarding their offshore income or gains which are taxable in the UK but the clients weren’t aware that they had to declare such income on their tax returns.

Examples include clients with foreign bank accounts where they received bank interest as well as dividends received from foreign companies. A lot of clients have NRE and NRO bank accounts in India which are used to hold Indian Rupees in the NRE account and fixed deposits in INR.

If a client has paid tax on interest in India and they can provide a TDS certificate or an Indian tax return confirming the amount of tax paid, then such tax can be used to offset tax due to HMRC by utilising the “foreign tax credit” relief. If you have a PAN in India then you can request a form 26AS to confirm the amount of tax paid in India on bank interest income if you are unable to obtain TDS certificates from your bank.

We have also heard from a lot of clients who have moved from Hong Kong to UK and they have forgotten to declare their bank interest, dividend & rental income from Hong Kong on their UK tax return and as a result, they have received a notification letter from HMRC.

Other clients include EU nationals who have moved to the UK in the last decade and still receive bank interest income and rental property income from EU countries & they have forgotten to include this income on their tax return and upon receipt of this notification letter from HMRC, they need to declare this income using the Worldwide Disclosure Facility.

For ex: German, Spanish, Italian or Portugese nationals living in the UK since 2011 but if they are in receipt of bank interest income or they have rented out their former residence in their home country, they will usually pay tax in their home country but they may not be aware that such income needs to be declared to HMRC too and any tax paid abroad can be used to offset tax due to HMRC by utilising the “foreign tax credit” relief when using the Worldwide Disclosure Facility.

If you have received a letter from HMRC about your overseas income then please get in touch with us to discuss the next steps.

Whether the worldwide disclosure relates to bank interest earned in India from private banks such as HDFC Bank, ICICI Bank, Bank of Baroda, Bank of India, Syndicate Bank etc. or if the undisclosed income relates to dividends on Swiss shares from a multinational employer such as UBS or any earnings from bank interest income and rental income from the EU, we are here to help!

We will always give you an honest appraisal of your position, including potential fees, whether it is favourable or not.

Our team is accessible and approachable, and ready to answer your questions, giving you the confidence you need when dealing with a sensitive issue such as an HMRC enquiry or other tax dispute.

Contact MCL Accountants on 01702 593 029 if you need any assistance with completing the certificate of tax position, setting up your Worldwide Disclosure facility and making a full disclosure to HMRC.